SHOULD YOU PREPAY YOUR OWN FUNERAL EXPENSES? Be Careful: Read the fine print 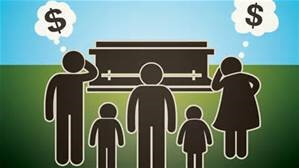 It sounds great in theory: Pre-plan and prepay your funeral expenses so your children and heirs won’t have to make expensive and difficult decisions while grieving. But not all pre-paid funeral contracts deliver on their promises as funeral homes go out of business, change hands, or raid the money consumers thought was safely invested in trust funds.

Comparison shop. The average cost of a funeral is $6,500, according to the National Funeral Directors Association—and that doesn’t include cemetery costs and extras like flowers, obituary notices, and limousines that can quickly boost the price to well over $10,000. But a full 79 percent of seniors report they have not done any comparison shopping for burial or funerals, an AARP study found.   Consumers received some protection from unscrupulous funeral providers with the creation of the Funeral Rule in 1984. This rule, administered by the Federal Trade Commission (FTC), requires funeral providers to give consumers accurate, itemized price information and other specific disclosures about funeral goods and services. The Funeral Rule requires funeral directors to provide price information over the phone to any caller who asks for it.

Unfortunately, the Funeral Rule does not apply to many of the features of pre-need contracts, which are governed solely by state law, and protections vary widely from state to state.

These pitfalls can be avoided, of course, by making decisions about your arrangements in advance, but not paying for them in advance. Be sure to tell your family about the plans you’ve made; let them know where the documents are filed. If your family isn’t aware that you’ve made plans, your wishes may not be carried out. It may also be best for you to consult an attorney on the best way to ensure that your wishes are followed.