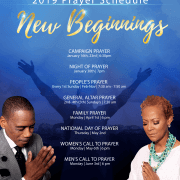 Prayer identifies the form of communication utilized by man to speak to God.  The people of God pray or talk to Him, to make solemn requests for help, expressions of thanksgiving, or even declarations of their hope and earnest expectations for His performance in their lives.  Many times, as a believer, we are faced with opposition and trials; however, the Word of God lets us know that God will never leave us or forsake us.  Jesus reminds us in Luke 18:1 that we must always pray and never grow weary in prayer.  In this parable, Jesus revealed how an unjust judge, who feared neither God nor man, was easily troubled by a powerless widow woman because she continually petitioned him to fulfill her request.  Our God is just; therefore, how much more is He ready, waiting and willing to fulfill the requests of his children if we would only make a commitment to talk to Him.

Jesus continually demonstrated the will and heart of God throughout the gospels.  God’s desire is that all His people will come to Him and speak to Him about their concerns.  Jesus said, “Come unto me, all ye that labour and are heavy laden, and I will give you rest.”  Many concerning situations that we face are beyond our control; however, as believers, we have the promises of God; not only provision, defense, justification or even vengeance, but His peace. In Philippians 4:6-7, the Bible reminds us that we should never become anxious regarding any situation that we face, and if we are honest, many times we are initially overwhelmed. However, the Lord has made a way of escape for us through prayer, by giving us the opportunity to let our requests be made known unto Him and He promises to faithfully keep our hearts and minds in return.

Prayer to the true and living Savior, the Lord Jesus Christ, is the only reason why we are empowered to resist the continual attacks of the enemy, for which he continually comes to steal our joy, kill our hope and ultimately destroy our lives.  Many times, the very same afflictions that we face are easily accomplished in the lives of those who do not know how to fervently hope in God through prayer. In Hebrews 11:6, the Bible reminds us that without faith it is impossible to please him, and he that comes to God must believe that he is and he will reward those that diligently seek him.  So, be encouraged and remember, God, is on your side.  Take a moment; 30 seconds, 15 minutes, or an hour, to pray and talk to your heavenly Father.  There is no religious form or an exceptional amount of faith required to be qualified to pray to God.  Through the sacrifice of Jesus Christ on Calvary, God has given you free access to boldly come before the throne of Grace, just as you are.  All you need is enough faith to simply open your mouth, speak to him and know that He is ready to hear and answer your requests right now.  Don’t forget; prayer will work if you work it!

The Formerly Incarcerated Reenter Society Transformed Safely Transitioning Every Person Act or FIRST STEP Act reforms the federal prison system and seeks to reduce recidivism.  The act was signed by President Donald Trump on December 21, 2018.   The Act shall, among many provisions: allow for employees to store their firearms securely at federal prisons; restrict the use of restraints on pregnant women; expand compassionate release for terminally ill patients; place prisoners closer to family in some cases; authorize new markets for Federal Prison Industries; mandate de-escalation training for correctional officers and employees; and improve feminine hygiene in prison.

The major provisions of the First Step Act, as it stands now:

Not every inmate will benefit from the changes. The system will use an algorithm to initially determine who can cash in earned time credits, with inmates deemed higher risk excluded from cashing in, although not from earning the credits. The Act also excludes certain inmates from earning credits, such as undocumented immigrants and people who are convicted of high-level offenses.

Nothing in the Act is groundbreaking.  That is one reason the Act is dubbed a “first step.” Still, the Act starts to chip away at criminal justice reform at the federal level, which is a small part of the criminal justice system.  It is important to understand that almost all police work is done at the local and state level. There are about 18,000 law enforcement agencies in America, only around 50 or so are federal agencies.

By and large, criminal justice reform will fall to the local and state governments.  Many have already passed the kinds of sentencing reforms that the federal system has struggled to enact.

For far too many people, by the time they start having serious discussions about retirement, they are already behind.  They haven’t saved properly, or there is no solid plan forward, or they just haven’t executed the plan they have in place.  And getting behind (because you know, time waits for no one) causes people to try to “make up for lost time” and they become more susceptible to “get rich schemes”.  Well, if get rich schemes worked, everyone would be rich! That is why the last two articles have focused on the two most popular retirement planning vehicles of our time, 401ks and IRAs.  Both have their advantages and disadvantages, but here we explore and contrast the two major options that may be available to you and try to help you determine which one is best of you.  We are going to compare traditional 401ks and IRAs with Roth 401ks and Roth IRAs.

The traditional 401ks and IRAs allow a person to pay into their retirement without paying taxes on the money they contributed into the plan.  Sometimes, these types of contributions are called, “before-tax” dollars or “pre-tax” funds.  Not being liable for the taxes on the contributions reduces the amount of taxable income to the person pays less in taxes for a given year.   This translates to less taken out of your employment checks and more spending money in your pocket.  These contributions are invested in an account gaining interest (hopefully for years) and can grow to a substantial amount of money!  Meanwhile, thousands are saved in taxes during the contribution years.  But there is a catch, and it’s a big catch.  When the money is withdrawn from the account, it is taxable.  All the money is taxable, the contributions and growth!  So, those years of contributing without paying taxes are made up on the back end; at retirement.

Roth 401ks and Roth IRAs allow a person to pay into their retirement, without any immediate tax breaks.  These contributions are commonly referred to as “after-tax” dollars or “post-tax” monies because the taxes have already paid on their contributions being put into the plans.  And just as before, the money is invested and over years, it can grow to be a sizeable nest egg to be used at retirement.  But here is a nice advantage; when the money is withdrawn for the account, there are no taxes due!  Because the account was funded with Roth, or “after-tax” dollars, the contributions and the growth are tax exempt at retirement.

So which option is better?  Traditional plans? Or Roth plans?  Well, ask yourself the following:  Would you rather pay taxes ONLY on the contributions to the retirement plan, or would you rather pay taxes on the contributions AND the growth?  That’s a silly question! Everybody wants to pay as little in taxes as possible.  Who wants to pay more!  Besides, nobody knows what the tax rates will be in the future and I don’t want to have to worry about it when I am retiring.  That is when I’m going to need the money I saved.  And remember, after years of consistent investing, the majority of the money in a retirement plan will be growth from the investments, not contributions.  So why would I want to taxes on all that growth if I don’t have to?  These points make Roth plans so popular and my personal preference!  But, for some, the advantage of larger “take-home” checks is too good to pass up!

Retirement plans with Roth options look better for long-term investing, but traditional options are not bad and should not be ignored if Roths are not a viable option.  The important thing is to do something!  Start early, it’s never too early.  I tell my younger co-workers they should have started thinking about retirement their first day on the job.  Why?  Well, because according to an article the Business Insider [1], most Americans spend more time planning vacations than retirement.  And separately, true wealth, the kind of wealth espoused in the Bible, takes many years to build.  And most going into retirement, have worked hard enough to have a nice nest egg for their years after leaving the workforce, but if it is not properly planned, there will be a lack the funds to enjoy the golden years as they are envisioned.  Hard work and poor planning don’t translate to riches; in the game of life, you don’t get an “A” for effort.  So take some time now to plan your retirement strategy so you can maximize the opportunities God has given you.  Isn’t that what a good steward would do?  God Bless.