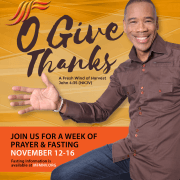 Every year during the month of November (Monday, November 12th at midnight — Friday, November 16th at 4:00 pm), Mountaintop Faith Ministries (MFM) embarks upon a week of ‘O Give Thanks, a week of consecration; reflecting on God’s goodness, His mercy and His grace towards us. It is during this time that we empty out or vacate our “house” and allow Jesus to take over and occupy our life in every aspect (mental, physical, financial, social and most of all spiritual). We exchange what we need to survive for what we need to live and that is Christ.

Fasting is a faith-move. We believe that because we are empty and ready to receive from God that the Holy Spirit will speak to us more clearly, filling us with His wisdom, knowledge and understanding.

From a physical aspect, fasting helps to detox our bodies, especially, if we replace food with fresh water.  Fasting helps reduce clogged arteries and lowers heart disease. So as we go through the week of ‘O Give Thanks, let us fast, pray, mediate and praise God for this is truly the embodiment of health and wellness.

Someone once said, “Fasting without prayer is just dieting.”  When you are doing a spiritual fast, it automatically comes by “prayer and fasting.” (Matthew 17:21). And so in health and wellness we do not “diet;” but rather, we ‘cleanse’ and focus on the entire body, mind and soul.

Prayer – taking time out to communicate with our Lord and Savior Jesus Christ through word or thought.

Fasting- a willing abstinence or reduction from some or all food, drink, or both, for a period of time.

Healthy Eating – eating a variety of foods that give you nutrients such as: protein, carbohydrates, fat, water, vitamins, and minerals you need to maintain your health, feel good, and have energy.

Wellness – the state of being in good health, especially as an actively pursued goal.

Once you complete the MFM week of ‘O Give Thanks, make sure you keep it going.  Take time out weekly to fast & pray.  MFM has established every Wednesday from 12 midnight to 4 pm as their Corporate Day of fasting.  Join us, simply “Get in where you fit in.”

The Legal Aid Center of Southern Nevada’s Mission is to the preservation of access to justice and the provision of quality legal counsel, advice and representation for individuals who are unable to protect their rights because they cannot afford an attorney.  How this legal service is provided is through the Pro Bono Project.

The Pro Bono Project coordinates private attorneys who generously volunteer to provide free legal services to individual who cannot afford an attorney.  While the attorneys do not charge clients their hourly rates, clients are responsible for any cost in the case that cannot be waived.

Through the Project, pro bono attorneys provide assistance with matters including, but not limited to, real estate, consumer fraud, bankruptcy, and family law, including representation of domestic violence victims and child victims of abuse.

The Pro Bono Project matches private attorney volunteers with low-income individuals in need of assistance in the following areas:

The above list is not exclusive of the areas of assistance.  It is also important to note that they DO NOT provide assistance with criminal, employment, personal injury, or traffic matters.

To apply for services, residents of Clark County must meet financial guidelines established the Legal Aid Center of Southern Nevada.

Once all necessary intake information has been provided, the case will be considered by a review committee.  The committee will determine whether we will assist the applicant based on a variety of factors, including, but not limited to, merits of the case and availability of volunteers.

If the committee decides to accept the case, the applicant will then be placed on a waiting list while we begin the process of trying to match the case with an available volunteer attorney. This process typically takes between 30 and 90 days.

Once a person is accepted for service, they MUST:

Answer: The Bible has a lot to say about managing finances. Concerning borrowing, the Bible generally advises against it.

Proverbs 6:6-11 offers wisdom concerning laziness and the financial ruin that inevitably results. We are told to consider the industrious ant who works to store up food for itself. The passage also warns against sleeping when we should be working at something profitable. A “sluggard” is a lazy, slothful person who would rather rest than work. His end is assured-poverty and want. At the other end of the spectrum is the one who is obsessed with gaining money. Such a one, according to Ecclesiastes 5:10, never has enough wealth to satisfy him and must be constantly grasping more and more. First Timothy 6:6-11 also warns against the trap of desiring wealth.

Rather than desiring to heap riches upon ourselves, the biblical model is one of giving, not getting. “Remember this: Whoever sows sparingly will also reap sparingly, and whoever sows generously will also reap generously. Each man should give what he has decided in his heart to give, not reluctantly or under compulsion, for God loves a cheerful giver” (2 Corinthians 9:6-7). We are also encouraged to be good stewards of what God has given us. In Luke 16:1-13, Jesus told the parable of the dishonest steward as a way of warning us against poor stewardship. The moral of the story is “So if you have not been trustworthy in handling worldly wealth, who will trust you with true riches?” (v. 11). We are also responsible to provide for our own household, as 1 Timothy 5:8 reminds us: “If anyone does not provide for his relatives, and especially for his immediate family, he has denied the faith and is worse than an unbeliever.”

In summary, what does the Bible say about managing money? The answer can be summarized with a single word-wisdom. We are to be wise with our money. We are to save money, but not hoard it. We are to spend money, but with discretion and control. We are to give back to the Lord, joyfully and sacrificially. We are to use our money to help others, but with discernment and the guidance of God’s Spirit. It is not wrong to be rich, but it is wrong to love money. It is not wrong to be poor, but it is wrong to waste money on trivial things. The Bible’s consistent message on managing money is to be wise. If you need financial help, you can inquire more through Christian Financial Concepts – http://www.crown.org.

‘Let us run with perseverance the race marked out for us, fixing our eyes on Jesus, the pioneer and perfecter of faith.’

Perseverance is a powerful expression of faith and crucial to breakthrough. We are called to a lifestyle of perseverance.

But God is not like an intimidating sports coach, waiting to rebuke you when you falter in the race of life. Jesus is at the finish line cheering you on and saying, ‘Keep going!’ ‘Keep going!’ His Spirit is within and upon you, available to provide everything you need.

The Second Wind of Recalling God’s Past Faithfulness

Following God’s instructions to Joshua, the Israelite army has marched once around the walled city of Jericho daily for 6 days. Now, on the 7th day, they are to march around the city 7 times. (Joshua 6)

Imagine being a soldier, and you have already marched 6 times around Jericho on that 7th day. Right now, you may be a little weary. And yet, there is still more marching ahead of you.

It doesn’t make any natural sense. Why the delay of time? Why the incomprehensible marching, using physical strength that you need to reserve for the battle ahead?  Sometimes, life is like that. It seems like you are circling the walls of impossibility; High and Impenetrable.

The Second Wind of Power to Pray

‘Then Jesus told his disciples a parable to show them that they should always pray and not give up.’ (Luke 18:1)

Six times, Elijah has sent his servant to look for the first signs of God’s answer to his prayer for rain. But the sky remains a stubborn blue.

‘Lord, you have given the word. I know this is your plan. Here I am in Your Presence, and I’m not giving up until I have the answer.’

Elijah puts his head down to the ground again and prays. Now, he sends his servant for the 7th time.

And yet that is all Elijah needs to be certain that God’s answer has arrived. Now he must act quickly on God’s answer. (1 Kings 18:41- 45) You can not stop, keep praying, God’s answer is on the way; learn how to rejoice at small signs!

The Second Wind of God’s Grace for Forgiveness

Isaac has been forced to change locations, and the effort of moving his family, servants and flocks is enormous. (Gen 26) His servants have been hard at work re-opening wells that his father Abraham once used and discovering fresh sources of water.

However, locals contend that the water belongs to them. Remarkably, when a .   dispute over position and property comes up, Isaac is willing to release and move on. There are new wells ahead.   Have you been in a place of dispute? Release the offense and move on.

Don’t Settle for ‘Enough’ when ‘Encounter’ and ‘Enlargement’ are still Ahead.

The season of contention is over. Isaac is now free to settle in Rehoboth the place where he has freedom to live. (Gen 26:16-22) But his Divine appointment is still ahead of him.

Room enough, and yet there is still more. In order to receive the fullness of God’s blessing, Isaac has to forge ahead to God’s appointed place for him, and that is Beersheba.

Beersheba is significant, and not just because it has access to water. It is a place appointed for Divine encounter. Not only Isaac, but also in times to come Jacob, Hagar and Elijah will have significant encounters with God in Beersheba. And in centuries to come it will be known as the southernmost border of Israel.

Maybe you have worked hard and are finally positioned in a place where there is ‘room enough’, but God is saying, ‘I have more for you.’ Will you be satisfied with ‘enough’? Or will you press on to the place of encounter and enlargement?

Today, I believe our God is saying, “Don’t settle for less than the fullness of what He has for you. It has cost you to get where you are today. But He has still more for you up ahead. Receive the second wind of His Spirit and keep going, for Your best season is yet to come and approaching soon.”